Haste The Day have announced that their final tour will be this coming February. Check out a message from the band below.

STATEMENT FROM THE BAND

This is a very difficult announcement to make, but Haste The Day will be doing its final tour February – March 2011. It has been an incredible 10 years and we want to thank all of our amazing fans who have stuck with us through all of our changes and growth as a band. If it weren’t for all of you, this band would have been nothing. There are many reasons why HTD is ending, however we mainly feel as though we have created the best music we can and believe it is now time for us to move on to the next stage of our lives. I remember when this band started a decade ago, we wanted to be like the Solid State/Tooth and Nail Records bands we grew up idolizing. We wanted to use our passion for heavy music and the love that God put in us to be a light in the underground scene; letting people know they are loved, important, forgiven no matter what, and capable of using their gifts to serve their fellow man. I never imagined that we would be able to put out five full length albums, tour the world, and develop so many meaningful relationships with the people who came to our shows. Without your support, this wouldn’t have been possible.

The 12 Days of Christmas will be in cities that we will not hit on our final tour so please come out to say goodbye this December. For our final tour, which will also be amazing, we are bringing our friends in My Children My Bride, The Chariot, and A Plea for Purging along for our Farewell Tour all across the US and Canada. We will be playing a great selection of songs from all of our records, including all of the fan favorites, rarely played songs, and a few songs that you guys keep begging us to play live. I have no doubt that this will be the best tour we’ve ever done and we cannot wait to see all of you and give you a hug goodbye.

We love you all, thank you for everything you’ve been to us, and we can’t wait to see you for the last time in 2011! We encourage you to keep your inner flame burning and show it off to the rest of the world!

Much Love to you all,

Haste The Day are streaming a new song titled “Wake Up The Sun” on their MySpace page. The song comes from the bands new album, Attack Of The Wolf King” due out June 29th on Solid State Records. A pre-order for the album can be found here.

Story of the Year have unleashed a hard-hitting new song, “To the Burial,” today in anticipation of their upcoming US tour with The Devil Wears Prada and All That Remains. Check out the song on the bands MySpace page. The bands upcoming tour dates can be seen below.

Story of the Year Tour Dates (w/ The Devil Wears Prada, All That Remains & Haste The Day)

Photos from this years MTVU Tour featuring Motion City Soundtrack, Mae, and Anberlin can now be seen in the photos section. These photos were taken at the Warfield, San Francisco on November 30, 2007. Be sure to take a look. 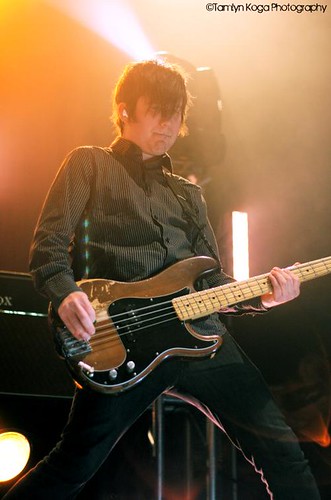 Haste The Day has launched their new album website at pressurethehinges.com.

SmartPunk has announced that in addition to Cinematic Sunrise, Haste The Day, Fall of Troy, and So They Say, the following have been confirmed to rock the Smartpunk.com stage at Warped: Drop Dead, Gergeous, Set Your Goals, Envy On The Coast. This Haste The DayÃ‚ interview was conducted at Alley Katz in Richmond, Virginia on the third floor. I’ll like to thank Jason for being such a nice guy and taking the time out to do this unscheduled interview. Make sure to pick up their new record Pressure The Hinges coming out in March.

Well, brief history. We formed about, well it was a five piece about five years ago. And the origin of the name is from a hymn “It Is Well With My Soul”, and it’s just a line from that song.

– In your opinion, what is the entire purpose behind the band?

Our purpose as a band is pretty ministry oriented. Our faith in God is the forefront of the band and that’s what we intend to keep it as.

– If you had to sum up the band in one sentence, what would it be?

– How has this tour been different then other tours?

This is a really short tour, it’s only like a week and a half long. We just got out of the studio and we are doing this, like a kind of wrap-up-the-year type of thing. And we just took a few of our friends’ bands out, like Calico and Flee the Seen and stuff.

– What has been the worst tour experience of any tour?

Well, when we first started touring, we were all completely broke and sleeping in the van, and on people’s dirty floors..

other member of Haste The Day: Places like this.

Haha, yeah. Just not being able to make ends meet and playing for like ten kids a night. Just the whole getting started is pretty rough.

– What elements do you try to bring to each show?

A lot of energy and a positive attitude. A positive message as opposed to angry and negativity.

– Are there any plans to record a record? If so, will the band be taking a new direction?

Yeah, well we just got done recording the new album called Pressure the Hinges and it’s by far a step up from anything that we’ve done. It’s really heavy, it’s really melodic, it brings out all of our strong points, musically and vocally. We tried to perfect what we’re best at. And I think we accomplished that with producers that we worked with, are really smart and had the same vision as we did. We spent a lot of time writing and recording this record. It’s a lot more well thought out than any of our other albums.

– How much do you think the lineup change affected the band?

Well I think it has definitely affected us for the better. As much as we all love Jimmy, Stephen brings a lot to the table. His diversity and the way he can scream and his range in screaming and singing, he’s a talented vocalist. We were able to work a lot with that on this new record. It’s not as much just screaming every verse, singing every chorus, but we mixed it up a lot more. Our lead vocalist was involved pretty much all the time.

– What is the general idea you are trying to get across with your lyrics?

Um, with the lyrics it’s pretty much whatever happen to be weighing on us at the time, or what happens to be going on in our lives. I know a lot of bands say that but it’s true. Our lyrics are always very faith based and that’s part of what makes us feel very passionate about whatever we write. Brennan, Stephan, and Mike write most of the lyrics, so it comes straight from their heart and what they are feeling at the time. That’s all I could say.

– What has been the biggest accomplishment in the band’s history?

Um,that’s a hard question. I mean, there’s getting signed in the first place, there’s kids coming up to us after shows and asking us to pray with them, just little stuff like that. I guess that could be considered the best thing that we’ve done, serving purposes like that.

– If you could make a split record with another band, who would it be and why?

I would love to do a split record with Def Leppard. They are one of my favorite bands.

– Where do you see the band going in 2007 and what would you like to focus on?

Um, it’s hard to say. Our friends in Destroy The Runner, they were on our last headlining tour, their record came out this year. They are awesome guys, we love them. I’m trying to think of other bands that put out records this year. For some reason, I’m drawing a blank.

– If you had to give advice to a group of people, what would you tell them?

Stay true to what you believe in, regardless of what it is. A lot of times people start off really, you know, fired up about one thing and than through time, they kind of get either jaded towards it or they get distracted from it. I would say just don’t lose focus on what is most important to you.

– If a movie was being made about the band, who would you want to direct and star in it?

I would want Clint Eastwood to direct it and want him to play my part.

– What is the biggest misconception about the band?

Um, I don’t know. It could correlate with the fact that we are Christians and people might think that we are really close-minded and you know, not able to relate with normal people, which is quite the opposite from who we actually are. If you could look at our tour history, you’ll see that. We prefer to tour with all sorts of different bands, bands of different beliefs and non-beliefs or whatever. You know, we just love meeting new people and interacting with people and we just love people in general.

– In your opinion, what is the biggest issue society is overlooking and that needs the most attention?

Man, that is a good question. We try not to be too political with the band, you know, that isn’t one of our main focuses. There is a lot of overseas poverty, I guess would be one.

Just that you can expect the best, heaviest, most awesome Haste The Day record coming out this year. And the only change has been for the better.