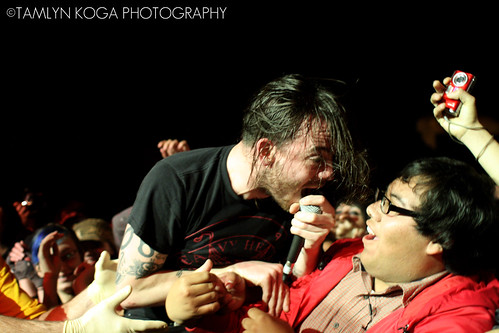 The 2009 Rockstar Taste of Chaos Tour has announced its dates and line-up. The lineup includes headliner Thursday, as well as Bring Me The Horizon, Four Year Strong, Pierce The Veil (all of whom will rotate their spot on the bill throughout the tour), and Cancer Bats. In addition, one local Ernie Ball Battle of the Bands winner will open the show at each stop.

This year, fans can expect a low ticket price (between $20-25 per ticket) as well as the return of the fun-filled concourse offering a bevy of fascinating distractions in between sets guaranteeing that the pandemonium will begin as soon as fans enter the venue.

Tour co-founders, John Reese, Lyman and Darryl Eaton state: “We are very excited about the great bands and concourse activities planned for the 2009 North American Tour. ROCKSTAR ENERGY DRINK has been a great partner helping us bring fans a great package and a big show at a very fan-friendly entrance price. We’re really proud that the RTOC has become an important event on music fans’ calendars in the long, cold winter in the U.S. and Canada.”

The Rockstar Taste of Chaos pre-sale begins Friday, December 12th, at 10AM in each market. Please go to www.rockstartasteofchaos.com for all on sale information, and ticketing links.

Here’s some Canadian Content news for those up north, or those that want some good stuff to check out:

Cancer Bats – Now on tour across the country (check out Distort Records for more info)… album “Birthing the Giant” was released on 06/06/06. Check it out.

Johnny Truant – New album “In the Library of Horrific Events” out on July 4th, 2006. Here are some tour dates (check out Dine Alone Records for more info):

City & Colour – Recently won an MMVA for ‘People’s Choice Canadian Artist’. Album has gone gold in Canada, with no plans for an international release (but trust me, it’s worth the import costs!). Tour dates (check out Dine Alone Records for more info):

This week’s Hot Ticket Event is the S.C.E.N.E. festival in St. Catharines, Ontario. With indie acts such as A Northern Chorus, Ken Reaume, Casey Baker, Sailboats Are White, Johnny Truant, Alexisonfire, City & Colour, Magneta Lane, Black Lungs, The Miniatures & Boys Night Out, the event is set up for success. St. Catharines is the place to be this weekend. Tickets are online at all Ticketmaster sites, and www.maplemusic.com.

That’s it for Can-Con right now… I’ll have more next week.