In just a few short moments bands will begin to announce their appearance at this years Bamboozle via #MidnightMADNESS on twitter. Headliners this year are Blink 182, Foo Fighters, Bon Jovi, and more. Let us know who you are you interested in seeing.

Three-day packages are currently available for purchase and single tickets will go on sale January 21 at 10:00AM EDT. Additional performers will be announced in the new year. END_OF_DOCUMENT_TOKEN_TO_BE_REPLACED

The 2012 Bamboozle Festival will feature headliners Bon Jovi, Foo Fighters, and Blink 182. Mark your calendar for May 18, 19, 20 to attend the 10th anniversary of the Bamboozle at Asbury Park. The annual three day festival held in New Jersey features three full days of solid music from your favorite artists.

VIP packages and 3 day passes will go on sale December 17th at 10:00 a.m. Stay tuned for more band announcements in the coming weeks. TBS will be playing this year’s Bamboozle Festival in NJ, along with a string of tour dates before and after the festival in the U.S. and the U.K. Dates can be seen below. END_OF_DOCUMENT_TOKEN_TO_BE_REPLACED 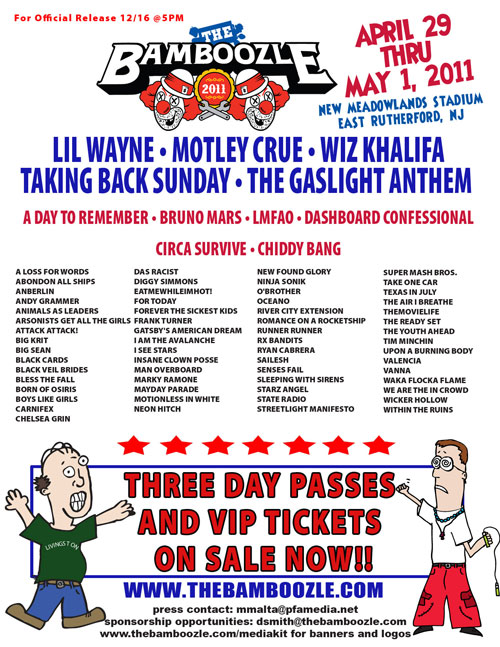 The winner of our Bamboozle Roadshow Ticket Giveaway has been announced below. If you are the winner you have 24 hours to confirm that you will be able to attend the show on June 24th in New Jersey. You will be receiving an email from me with the title Bamboozle Roadshow so be on the lookout!

The set times for Bamboozle have been announced.