You are here: Home / News / Rise Against Photos & Review 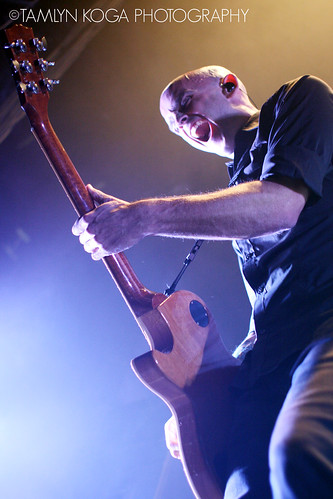 Photos from Rise Against’s headline tour with Thrice can now be seen in Driven Far Off’s photo section. These photos were taken at the San Jose State Event Center on November 7, 2008.

Overall Rise Against put on a great show on their tour supporting their newly released album Appeal To Reason. One of the songs with the greatest response was of course “Prayer Of The Refugee” from their previous album The Sufferer & The Witness. Although the band played many songs from the popular album, they also had a strong focus on their new material from their album Appeal To Reason, which was definitely a sight to see and a definite crowd pleaser. During their set their vocalist ran around the stage, while the guitarist jumped off the drum kit and various steps scattered in front of the stage. Eager Rise fans got there early and were happily crushed against the barricade ready for the band to come on stage. All in all Rise Against are definitely a band to see and they’ll be heading your way soon if you live in Europe or Japan, but don’t worry if you don’t because once they’re done they’ll be heading back home to the states for Bamboozle. To check out their tour dates be sure to visit their website at http://www.riseagainst.com/.